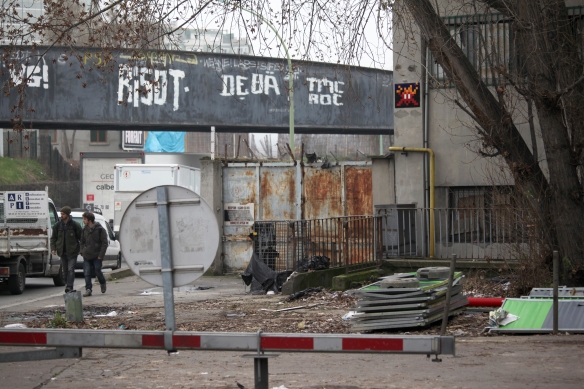 One evening of February 2011, Space Invader took this picture of Lek and me as we were exiting the Mausoleum. Back then, he didn’t know who we were and therefor had no idea what we’d been secretly doing inside that building for months. At the precise moment he took that shot, we were only two stangers for him, stuck in his camera’s lense. The night before, he had pasted on the abandoned supermarket his signature UFO’s with red,orange and blue mosaic tiles. As always, he had chose a strategic location, targeting one of the building’s exterior walls facing a perpetually busy freeway ramp. He was absolutely right. Everyone would drive by it and see it. Without knowing it, he had just endangered our ‘project’.

From the beginning, our biggest fear was to see the spot fall, that other writers or photographs could find it and destroy or spread what we were preparing inside.
After Keag and Sore from the RAW crew, Invader was the second uninvited guest to do something on the building’s facade, hence making it more ‘visible’ to eyes used to looking for that type of place… With each new day, it was becoming more urgent for us to finish whatever it is that we had started.

The next day, when he came back to take pictures of his mosaic, we bumped into him as we were leaving the Mausoleum. Lek knew him for having met years before at one of Seb174 friend’s party near Bastille. Invader didn’t recognize him though and didn’t seem to appreciate that two strangers, coming out of nowhere, could call him by his stage name in the middle of the street, in front of everybody. Slightly defensive, he told us he wasn’t Space Invader but his assistant and that he was here just to take pictures… Both skeptical and amused, we shortly ended up leaving him alone and woke our separate ways. For months, we laughed when reminiscing of the encounter, hesitating to mention it in our book. As if he was one of our guests, we added his name to the movie’s final credits.

Two weeks after the Mausoleum’s exhibition opening, Invader’s news book, The Invasion of Paris 2.0, came out. In it, he documents the final stages of his Parisian invasion, thanks to 1400 pictures.Page 58-59, as he is photographing his 911th Invader pasted on the capital’s walls, two strangers are walking in his direction. In the top right side of the image, he added the following text:

“PA_911 / Burning 911
I spotted this rather out of the way spot when leaving the beltway. The Space Invader going up in flames went well with the apocalyptic look of the place, so i put it there. A few days later, when logging it in my database, I realised it was PA_911 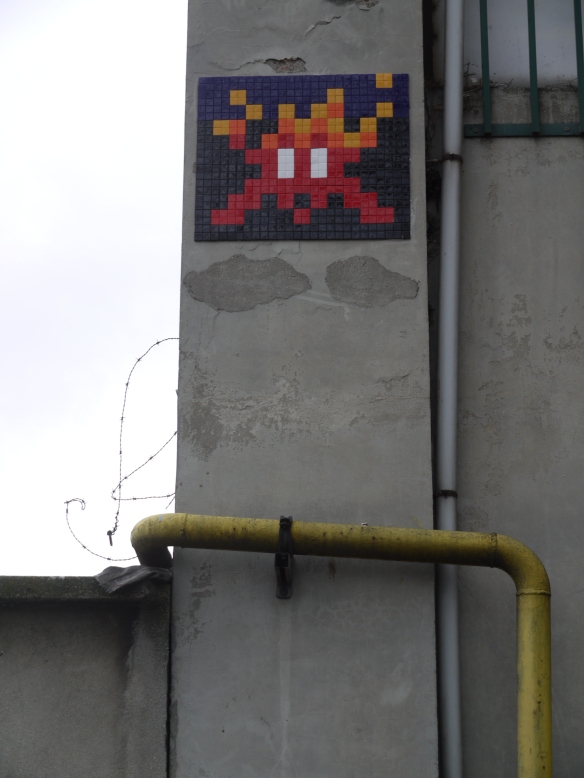